Liverpool and Porto announced on Tuesday the transfer of Marko Grujic, meaning that after spending theseason with the Dragons on loan, he’s now back at the club.

When writing about the move on their official website, the Reds claimed the midfielder is leaving on a permanent deal, while the Portuguese side claimed it’s a loan with an option to buy.

Well, local newspapers are obviously talking about this move today, and it turns out that the way the business was done was actually different from what both clubs are saying.

Newspaper O Jogo writes that the buying clause isn’t optional, but obligatory, with Porto having to spend €10m on the midfielder at the end of the season, which they state is why Liverpool already confirmed that the move is permanent. 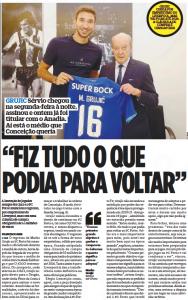 The outlet adds that Grujic ‘never hid his desire’ to go back to Porto, and even turned down other approaches while waiting for the Dragons to go and get him.

Reports from Portugal had been claiming that Liverpool initially demanded €17m for the move, so by agreeing a deal where they’ll pay €10m only next year, Porto certainly showed how good negotiators they are once again.