Home Europe Despite a medical and contract agreement a month ago, Newcastle exit turning...
SHARE

It’s now been a month since the start of Chancel Mbemba’s transfer saga.

Newspaper A Bola has a story about this anniversary today, saying that ‘in normal circumstances’, Porto would have already given up on the player.

But the Dragons are really keen on signing the Newcastle United defender, and that’s why they will keep pushing so they can find an agreement for him.

A month ago, on June 16th, Mbemba has a medical at Porto and agreed a four-year contract, all with Newcastle’s authorisation.

It all seemed fine, until Porto found out that the Magpies were demanding €9m for the transfer, while they were expecting to conclude it by paying only €7m. 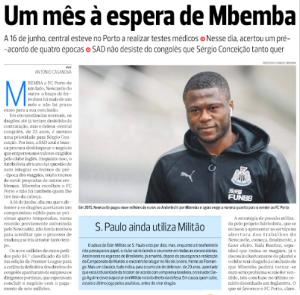 A Bola claims that Mbemba is pretty convinced he wants to join Porto, and isn’t even listening to other offers. They say that the defender has refused to join Newcastle’s pre-season squad, and this ‘pressure’ is starting to work.

But it seems like this battle will go on until the end of the transfer window. It seems quite unbelievable that the clubs can’t find a deal because of a €2m difference, especially with Porto playing the poor club here.