He explained the defender had injured his back and needed rest for around a week. Regardless of the injury worry, Lindelof joined up with the Sweden squad, and there was hope he’d be available even after he missed initial training sessions.

That didn’t seem too unreasonable, Sweden’s first match of the current break is against Malta on Saturday, and Lindelof probably wouldn’t be needed. So he could then be saved for the rather harder task of playing Spain on Tuesday.

However, according to Aftonbladet, he’s expected to start the first match.

Even on Wednesday, Lindelof was in rehabilitation rather than training, but the Swedish newspaper have pencilled him in and explained the general training suggests manager Janne Andersson hasn’t picked out an alternative to the Manchester United player. 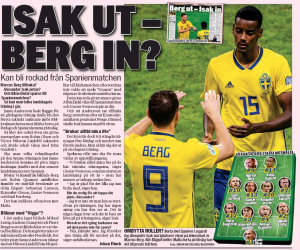 On their website, Aftonbladet have an update saying Lindelof is training today.

Solskjaer will be watching the Malta match with some worry.