Home Championship Despite Fulham midfielder links, price may come as something of a shock
SHARE

Tuttosport has today one of their big stories about all the targets that a certain Serie A club have for the rest of the summer transfer window.

It’s claimed that AC Milan are looking for players of almost every position. For the midfield, one of the top names on the list is Jordan Veretout, who could actually be heading to Roma.

It means the Rossoneri need to find an alternative, and that’s when two new names pop up: Jean Michael Seri and Rodolfo Pizarro.

Regarding the Fulham player, Tuttosport claims that his agent ‘hasn’t denied’ that they are evaluating the offers to leave the West London side, who will be playing in the Championship this season. 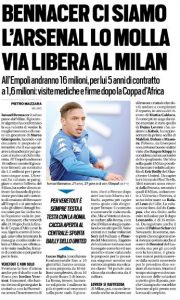 Seri’s agent has indeed been speaking to the Italian media and teasing with a transfer to Serie A, but we wonder how much would Milan invest in the signing.

Especially because according to Tuttosport, Pizarro has a release clause of only €8m at Monterrey. With Fulham certainly demanding a lot more for Seri, the Mexican player would be a much more reasonable target for Milan.