It had been a while since we last saw claims regarding Crystal Palace’s interest in River Plate striker Rafael Santos Borré.

The Premier League side were said to be after the 24-year-old last summer, and the rumour slowly went away for the past year.

But Argentine newspaper Olé brings a big story on the player today, claiming that he may be the next star to leave River Plate, and they mention the Selhurst Park side again.

It’s said Crystal Palace were ‘the first’ to show some interest in Rafael Borré, but the problem is that the club isn’t seen as an ‘attractive destination’ for the player. 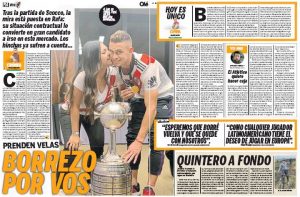 Olé point out that Crystal Palace are a mid-table club who are hardly getting a place in European competitions, which isn’t big enough for a striker who fights to be the number nine at the Colombian national team.

Since Borré’s contract with River Plate expires next year, the Buenos Aires side are going through that classic stage where they either renew his deal or sell him before it expires.