Scoring 14 goals and assisting three times in the Bundesliga last year, Jean-Philippe Mateta announced his arrival on the big stage after a similar season in Ligue 2 on loan from Lyon.

Bought by Mainz in 2018, the 22-year-old was primed for another good campaign, but an injury (and an operation) to his meniscus in July stopped him in his tracks, and he has yet to feature for the German club.

This, however, hasn’t stopped the interest in him, as a number of Premier League clubs, including Tottenham, have been following him closely, even asking his agent about how his recovery is going.

The news was first reported by Sport Bild, and it’s now been backed up by France Football, who explain that ‘despite everything’ that has happened to him, Tottenham are still planning on signing the forward in either January or next summer. 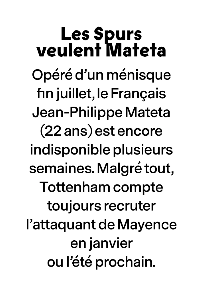 The idea would be for the young forward to provide backup and competition to Harry Kane, who hasn’t really had a chance at a rest in the past few years, with the likes of Fernando Llorente, Vincent Janssen and co. never providing Tottenham with the quality needed.

According to Sport Bild last week, the player would cost around €30m, which is certainly affordable for Spurs in a position they really need some help in.

France Football seem adamant a move will be made, so we’ll have to wait and see if anything happens in the next month or so. If not, it’ll be for the summer.