Home Europe Player may be West Ham’s ‘dream’ for January, but claim of offer...
SHARE

There was a lot of excitement over the weekend in the West Ham transfer rumour sphere, when CuoreToro came out of nowhere stating the Hammers were interested in Andrea Belotti.

Logically, it made sense, having seen some bids for Krzysztof Piatek rejected, to move onto the Torino striker, yet it still remained a long shot.

Talk of a €50m bid being readied appeared in the article, but having rejected €60m in the past from Atlético Madrid, it seemed unlikely the Serie A club would accept such an offer.

Well, as things stand, they haven’t had to do anything, as Corriere dello Sport on Sunday report that, despite Belotti being ‘West Ham’s dream’ to replace Marko Arnautovic should the Austrian leave for China, no one had come knocking on Torino’s door. 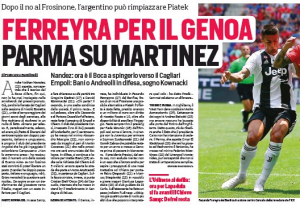 This comes after some websites reported Torino rejecting a €40m bid, suggesting someone is being fed false, or at least dubious, information along the way.

Had something as big as West Ham getting turned down for Belotti happened, we’ve got a feeling one of the national Italian newspapers would have made a big deal out of it on Monday.

That isn’t the case.