Despite Daniele Rugani’s agent coming out and explaining there were no talks regarding his client and an exit from Juventus, Corriere dello Sport keep pushing the idea that a sale is on the cards.

On Tuesday, the Italian newspaper explain that Chelsea are prepared to offer around €30m for the young centre-back, but that’s still some way off what the Serie A champions would be prepared to accept.

Juventus would be looking for around €40m for the 23-year-old, although there’s a belief that both teams, should negotiations take place, could meet half way at €35m.

Davide Torchia, Rugani’s agent, stated the meeting with Fabio Paratici, the club’s director of football, was merely to discuss ‘what to do going forward and how to improve the player’. 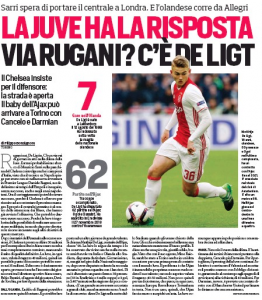 As for Chelsea’s need for a new centre-back, the Blues already have a fairly impressive collection of players in that department, and you’d think a few departures might be needed before investing heavily again.

Down their end, Juventus would use the money to replace the young defender with Matthijs De Ligt, who would allegedly set them back around €40-50m.