Home Championship “Deserves to be where he is” – Teammate says player got right...
SHARE

Eric Maxim Choupo-Moting moved to Stoke City from Schalke last summer and after the Potters were relegated to the Championship, the 29-year-old was allowed to leave the club on a free transfer as he completed a switch to Paris Saint-Germain on the Ligue 1 deadline day.

He played under the French champions’ manager, Thomas Tuchel, at German club Mainz and a move to Parc des Princes saw him reunite with his former coach.

The Cameroon international and Juan Bernat moved to PSG on the last day of the transfer window and today’s edition of L’Equipe claims the two new signings ‘do not fit’ the standards of the club as the former Stoke player is unlikely to have much playing time this season.

However, Choupo-Moting’s national teammate and Kayserispor defender Jean-Armel Kana-Biyik thinks otherwise because the forward’s qualities and ability to play anywhere up front makes him best suited for Tuchel’s side. 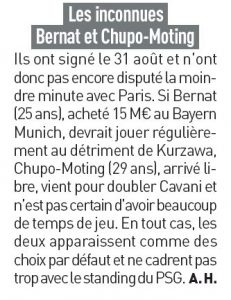 “He is a talented player. He is good with his feet, he scores goals and despite his great size, he can also play on the side. He has everything to win at PSG, I have no doubt about it. I wish him a great success, he deserves to be where he is,” Kana-Biyik told Sports.fr.