Fotomac report Derby County manager Phillip Cocu remains keen to sign his former player Martin Skrtel and has personally got involved in convincing the player to sign for the Championship side.

The Slovakian defender is currently without a club after his contract with Fenerbahce expired and Fotomac say Derby County could be his next destination.

It’s reported the Dutch manager enjoyed working with Skrtel during his spell with Fenerbahce last season (which may have been the only thing he enjoyed) and believes signing the defender will help his side’s promotion chances.

Fenerbahce are said to be in talks with Skrtel to extend his stay in Istanbul and the 34 year old will make a decision over his future in coming days.

According to Fotomac, Cocu recently held talks with the central defender as he looks to strengthen his squad for next season. 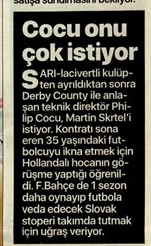 Skrtel has also been linked with a move to Rangers in recent months and the possibility of being reunited with his former Liverpool teammate Steven Gerrard.

There have been reports the Ibrox club have made an offer to the Slovakia international but he’s yet to be convinced over a move to Scotland.