Ever since Antoine Griezmann signed for Barcelona, his relationship with Lionel Messi has been a source of stories for the media.

It was widely believed the Argentine superstar wasn’t in favour of his club signing the Frenchman in the first place, and their lack of chemistry in the early stages following his arrival showed as much.

Things have improved a little bit since, but it certainly isn’t the magical partnership the Catalan club hoped it would be when they spent €120m on the forward, and it seems Griezmann will always struggle at Barcelona until Messi leaves.

That’s how his former advisor and the man who found him, Eric Olhats, sees it, saying as much to France Football this week.

Speaking to the French magazine in a big exposé on the former Atlético Madrid star, the ex-scout didn’t hold back when giving his views on Messi, of all people.

He said: “Antoine arrived in a struggling club where Messi has a view on everything. He’s at the same time emperor and monarch, and he didn’t see Antoine’s arrival with a good eye. His attitude has been deplorable, he made him feel that. I’ve always heard Antoine say there’s no problem with Messi, but never the other way around.

“In my eyes, Messi said he wanted to leave to see what role he still had as a decision-making player, regarding the players who arrived and those who left, but he eventually stayed. Classic Messi! As good on the pitch as he is bad off it… Barcelona has been suffering for a while. There was a cancer in that club, and it obviously leaves some marks”. 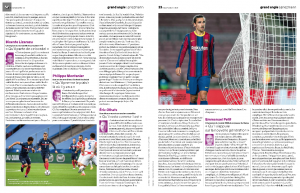 Olhats then goes on to explain the difference in the Griezmann we see at Barcelona and the one who turns up for France international duty, where he manages to fully showcase his talent.

It didn’t take long for him to return to the La Liga club’s issues, however.

He continued: “It’s club that’s sick, not him. Last year, when Antoine arrived, Messi didn’t talk to him, didn’t pass him the ball. He created a real trauma for a more than negative adaptation. That clearly left its mark. It was clear and visible. Add to that the president stepping down, the club conceding eight against Bayern and three different managers… The conditions aren’t good”.

However, Olhats firmly believes his former protégé will come out the winner in all this, ‘very confident’ that he’ll turn things around.