Adama Traore to Barcelona continues to be a theme in the Catalan press, as has been the case for several years.

The Wolves player is now seen as a possible replacement for Ousmane Dembele, with the Frenchman’s contract expiring at the end of the current season.

Dembele and his representatives are asking for far more than Barcelona want to pay, and there’s no sign of a breakthrough on a renewal.

Therefore, Sport report Barcelona are already planning for the chance of losing their player on a free transfer next summer. The Wolves man is an option, and it’s explained he ‘would be delighted’ if the move happened. 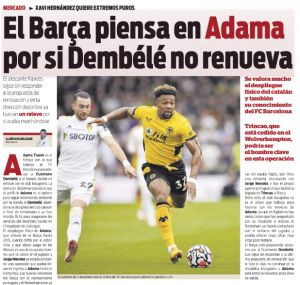 Having been at Barcelona previously, Traore has friends there, and also built a relationship with Ferran Torres whilst with the Spanish national teams.

Jorge Mendes is said to be the one who would mastermind a deal, and it’s again claimed a permanent transfer for Francisco Trincao, currently on loan at Wolves, could be part of the deal.