The Norwegian winger is expected to leave the Premier League club this summer and the Turkish press have linked him with a move to the Istanbul club in recent weeks.

Today Fanatik say the player is still on the radar of Sevilla and Celta Vigo but his first choice remains Besiktas, as previously reported.

The 25 year old reportedly wants to leave Southampton this summer in order to kick start his career.  Elyounoussi failed adapt to Premier League football following his €18m move from Basel, and a quick exit is on the cards. 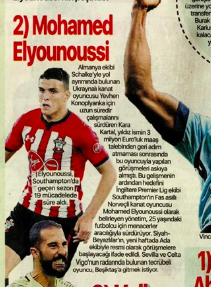 According to Fanatik, Besiktas sporting director Ali Naibi will send a member of the club’s transfer committee to England for talks with the player.

The Super Lig side are hoping they can sign him before the Turkish transfer deadline.

With the summer arrivals at the St Marys stadium the Norway international is likely to further struggle to get games this season.