As you know, Manchester United and Liverpool were both after centre-backs this summer.

The latter have already fixed that issue, signing Ibrahima Konaté from RB Leipzig, but the former still haven’t found anyone, with the likes of Raphaël Varane, Jules Koundé, Cristiano Romero and Kalidou Koulibaly often mentioned as targets.

That last name on that list, however, is fading more and more into the background, mostly because the Red Devils don’t think he’s worth the price Napoli are touting.

Once one of the more in demand centre-backs in the world, Koulibaly is now struggling to find any real suitors at a time when the Serie A side are looking to sell him.

Perhaps it’s for that very reason that clubs are reluctant to dive in head first, since Aurelio De Laurentiis’ stance has gone from claiming the player was near unsellable a year ago to touting him at near half his old price these days. 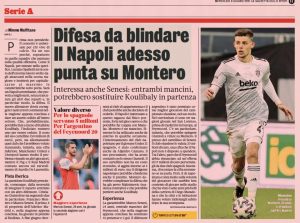 Gazzetta dello Sport explain ‘the cost of his transfer (€50m) is driving away the clubs that would have wanted him’, as they have allocated a ‘lower figure’ for any transfer involving Koulibaly.

Manchester United, in all this, have apparently ‘solved the problem by turning to other players’, although they still haven’t actually signed anyone, unlike Liverpool.

As for Paris Saint-Germain and Real Madrid, they are ‘still counting on De Laurentiis’ repentance’.

It appears that Koulibaly to Old Trafford could be a thing of the past, much to the relief of many Manchester United fans around social media.

Unless Napoli drop their demands a bit more, that is.