It’s a bit disappointing when we see the same source who started the rumour taking a step back when reporting it again.

This is the case of A Bola who, on Monday, claimed West Brom were interested in signing Diogo Queirós from Porto.

They said the defender could leave the Dragons on a loan deal this summer, as long as the club sign another defender. And reports from Portugal have been saying that Ivan Marcano is close to returning to the club, so it all adds up.

But when reporting about Queirós’ situation once again today, A Bola only refers to West Brom as the ‘news which comes from England’. 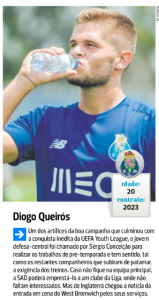 They say the defender could be loaned to another Portuguese side, although this ‘news from England’ claims the player is wanted by the Baggies.

We have no idea why would A Bola back off now. In situations like this, they would normally say ‘as previously reported by us’, or something of that kind.

What is safe to say is that there are no developments on this story for now, and things should only happen once Porto close a deal for Marcano.