If there’s one club who pulled off a great deal this summer, it’s FC MItdjylland with the sale of Bubacarr Sanneh to Anderlecht.

It’s not that getting rid of the centre-back was a good thing, it’s more the fact they made a £7m profit in less than eight months, buying him from AC Horsens for £180k in January and selling him to Anderlecht for £7.2m towards the end of August.

Playing just eight minutes for the Jupiler Pro League side so far, the 23-year-old might have to wait to get his first start, but he’s got high hopes for his spell in Belgium, trying to impress enough to get a bigger move in the future, preferably to one of his two favourite clubs: Manchester United or Real Madrid.

Speaking to Nord Eclair in Belgium, he said: “I was told this would be a good step for me, and I think so too. Honestly, Anderlecht is just a stepping stone. My ambition is to go higher than the Belgian league.” 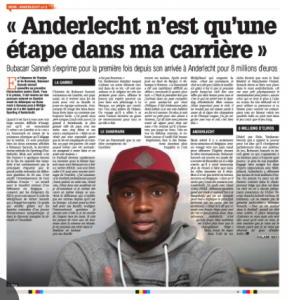 The affinity for Manchester United is paraphrased in the interview rather than a direct quote, but it seemed important enough to be mentioned.

It’s also extremely rare for players to be this candid about what they want from their current stay at a club.

With José Mourinho keen on a new centre-back, maybe someone should tell him to keep an eye on what Sanneh will be doing at Anderlecht?

Who knows what could happen? Either way, the Gambia international seems determined to reach his goals, and if that’s to one day play for Manchester United, no one should stand in his way.