Chelsea defender Andreas Christensen has told the Danish media he’s getting ready for preseason with the Premier League champions. The Dane has recently finished his loan spell with German side Borussia Mönchengladbach, and as far as he’s concerned he’s set to become a Chelsea player.

Speaking ahead of Denmark’s internationals Christensen was asked about his future and the plans Chelsea have for him next season.

The 21 year old confirmed he’ll join up with Chelsea next month following his spell in the Bundesliga. He also revealed he’s yet to speak to the manager, but has been in contact with other people at the club with regards to matters like his accommodation.

“I will join up with Chelsea on July 7th. I haven’t talked to Conte yet. I have talked to the sporting director and all those responsible for getting the players set up with a flat and what else belongs to them. The sports director says the plan is that I meet like all the others and go through the preseason,” said the Chelsea defender. 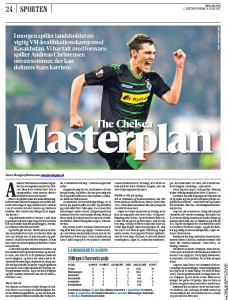 Christensen has spent the past two seasons playing in Germany with Borussia, and despite his return to England he’ll have a difficult task forcing himself into the plans of Antonio Conte. Chelsea have strength in defence, and it’s possible they could bolster their defensive options further in the next window after John Terry left the club.

In recent days it’s been confirmed Christensen will be included on Chelsea’s preseason tour, which could give him an opportunity to impress Conte.