Home Europe Defender set to ‘pack his bags’ and fly in to join Wolves,...
SHARE

Jonny is on the way, almost.

Marca report in their Tuesday edition that the negotiation between Celta Vigo and Atletico Madrid has been ‘closed’ and the 24 year old now gets ready for his next move.

On Sunday, Jonny travelled to Madrid to go through the motions with Atletico.

Medicals and signing contracts followed and now he has to ‘pack his bags’ again for the switch to Wolves.

Atletico don’t want the player’s wages on their accounts this season, trying to stay on the right side of FFP, and therefore a loan move was already being considered when the footballer was targeted. 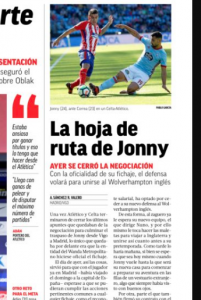 The plan is he’ll travel to England ‘as soon as possible’ to start preseason training with his new teammates.

It’s expected he’ll fly out today and that could see him start Wolves training as quickly as Wednesday.

He was used almost exclusively as a left back, but the two-footer can also operate on the right or even in central defence.