Home Europe Defender ‘highly appreciated’ by Manchester City – Has ‘admirer above all’ in...
SHARE

Inter Milan’s Alessandro Bastoni has ended up in the sights of Manchester City, according to claims from Italy.

For the past few days, reports in England stated the defender is included in Tottenham Hotspur’s summer target list. However, he has ‘discarded’ the idea of joining Spurs since they are ‘not part’ of Europe’s great teams.

The same cannot be said for Manchester City, as the Cityzens are leading the league table and sealed a berth in this season’s Champions League semi-final after overcoming Atlético Madrid on Wednesday.

Thursday’s edition of Corriere dello Sport have a report focusing on the Serie A winners’ interest in Torino star Gleison Bremer. They may have to let go of one of their ‘jewels’ like Bastoni, who is in the sights by the Cityzens.

It’s claimed the Italy international has ‘attracted the wishes’ of several big European clubs and is ‘highly appreciated’ in the Premier League by Manchester City. The newspaper adds the player has an ‘admirer above all’ in Pep Guardiola. 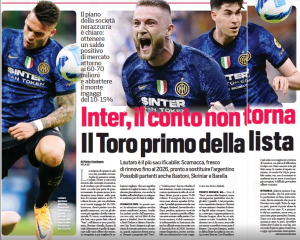 Corriere are only stating that the English champions and their manager appreciate the defender.

Time should tell whether or not the Etihad club will make a firm approach for Bastoni in the summer, but at least we now know Guardiola hasn’t forgotten about him.