Towards the end of the summer, one of the big transfer stories surrounding Aston Villa was that of the potential arrival of Le Havre centre-back Harold Moukoudi.

Going as far as visiting the Championship side’s infrastructures, the 20-year-old told France Bleu back in September that one of the reasons why he didn’t sign was that he came to the realisation he should have another year in France, at least.

As well as the Villains, the 20-year-old was coveted by a number of Ligue 1 sides, but the move to France’s top-tier didn’t happen either, and, speaking to Onze Mondial, he expanded on his reasons for rejecting Aston Villa and the rest of his suitors.

He said: “I heard the names of different clubs: Rennes, Lyon, Marseille, Lille and Aston Villa. It was very flattering. I wanted to join the elite. It didn’t happen. I’m under contract at Le Havre so, in my head, it was very clear. I needed to be irreproachable towards them. 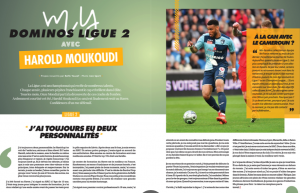 “I owe it to myself to respect the club. It deserves it. I quickly threw myself into the current campaign. The best is yet to come”.

Explaining he ‘doesn’t have dreams, he has objectives’, Moukoudi made it clear he ‘knows what he wants to do’ going forward, both on and off the pitch.

Whether that is going to Aston Villa next season, we doubt it, especially if he carries on impressing like he has done, but you never know.

Look at Neal Maupay. He’s having the time of his life at Brentford.