Over the summer, Steven Gerrard wanted to bolster his Rangers squad with a centre-back, and a move for Filip Helander, who was at Bologna, was organised.

The Swede managed to establish himself as a regular for six games between October and December, but a foot injury has since kept him out of the squad.

However, prior to his signing, there were a few rumours that Rangers were interested in Simon Deli, who was then at Slavia Prague and available at a very affordable price.

Well, the possibility of moving to Ibrox has now been confirmed by the player himself after his summer move to Club Brugge, where he is currently preparing to face Manchester United in the Europa League. 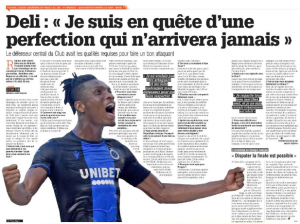 Speaking to Belgian newspaper Nord-Éclair, he said: “Last summer, I had three main options: either I stayed over there (Slavia Prague) with a great wage and the assurance of being captain, or I left for Rangers or Brugge to try a new challenge.

“The project of the Club (Brugge) seduced me a bit more, more ambitious. That’s why I went for it”.

Since arriving in Belgium, Deli has been a stalwart for Philippe Clément’s side, making 37 appearances in all competitions, scoring three goals and assisting another.