Far from a a regular early on in the season, Modibo Sagnan is slowly but surely making a name for himself at Real Sociedad these days.

Starting four of the last eight games for the La Liga side, the 21-year-old’s performances have caught the eye of Everton, who are intrigued.

This is according to France Football, who explain Sagnan has ‘attracted the gaze’ of the Premier League side, who have gone as far as ‘coming forward for information’ regarding his future with the Spanish club.

It’s not said whether they want to make a move for January or the summer, but the French magazine add the Toffees are ‘interested in the potential’ of the young centre-back. 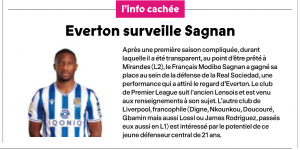 Coming through the ranks at Lens, Sagnan was bought by Sociedad during the summer of 2019, but was loaned out in January 2020 to CD Mirandés for the second half of the last campaign after failing to make the cut.