One of the more realistic options for big clubs thanks to his €36m release clause, Kostas Manolas is a recurring subject of transfer stories these days.

Manchester United are the latest Premier League club to be heavily linked with the Greek international, yet Chelsea have been looking at him for quite some time too.

According to Leggo in Italy, both the Red Devils and the Blues have made Manolas an offer ahead of next season, knowing full well they don’t have to negotiate with Roma for the price.

However, with rumours that Antonio Conte could end up replacing Claudio Ranieri at Trigoria, the centre-back has asked his agent, Mino Raiola, to hold his horses with the offers and wait until the end of the season. 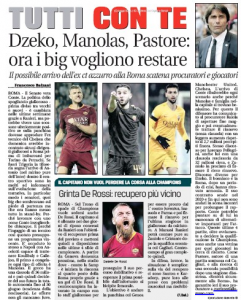 Should the former Chelsea manager take over, then there is still the possibility Manolas could renew at Roma, thus getting himself a slightly better wage and giving his club a chance to get rid of the release clause altogether.

For Manchester United and Maurizio Sarri’s side, there isn’t much left to do but wait and see if Conte ruins their plans going forward.