Home Europe ‘A defeat for everyone’ – Mourinho to Everton rumours reach Italy, not...
SHARE

Arriving to replace Carlo Ancelotti, Rafa Benitez got Everton off to a good start in the early days of the season, but injuries and a bad turn of form have seen the promising rise up the table collapse dramatically, with the Toffees currently 16th.

Fans are getting understandably frustrated, which has led to calls for the Spaniard to be sacked, and José Mourinho linked with the job.

The AS Roma manager has also struggled with AS Roma, although nowhere near as much as Benitez, and while it might seem a bit hasty for a return to the Premier League, we all know the Portuguese manager loves England and managing there.

Still, this is a move the Italian newspapers can’t see happening just yet, as Gazzetta dello Sport point out that while Mourinho is currently ‘bruised’, losing the last two games to Bologna and Inter, ‘the hope that he can reverse the trend remains solid’.

Roma have invested a lot to help him, and are willing to do a bit more, fully aware he is still only in his first year as manager, but the stats don’t lie.

Gazzetta recall that ‘at this point, in his first year, Fonseca had 7 points more’, and the last time the club had seven losses in the first 16 games of a season was in 2008-09. 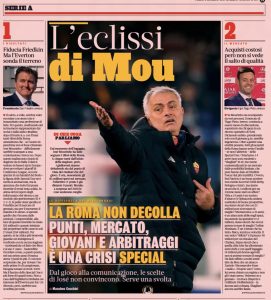 Despite all this, ‘the charm of the Special One is strong than (almost) everything’, which is when the rumours of an Everton moved a brought up.

However, it’s made clear that ‘a divorce would be a defeat for everyone’, meaning Mourinho failing at his task in Italy and Roma at improving things by sacking Fonseca and bringing in the ex-Manchester United manager.

As for Everton, it would also mean a failure, calling it quits with Benitez, who was hoped to be the ideal successor to Ancelotti with his Premier League and European experience.