Celtic defender Dedryck Boyata’s father played for Union Saint-Gilloise and Stade Leuven in 90s and he didn’t want his son being denied an opportunity of playing for an English club.

The 27-year-old spent three years with FC Brussels before Manchester City signed him for their academy in 2006, where he spent three more years.

However, he struggled to become a regular at the Etihad, which is why they sent him on two loan spells to Bolton Wanderers and FC Twente between 2011 and 2013 and his performance in the two loan spells was not sufficient to be a first team regular with the English club.

“I did not realise that Dedryck should play little in England when we received the Manchester City offer,” Boyata’s father told De Standaard.

“You know, I was a footballer myself and I just did’t want to deprive my son of such a huge opportunity to break through.”

Boyata Sr reveals Manchester City paid a salary of “£200,000-a-year” when his son was 16, but admitted it was too late by the time they realised the Premier League champions’ model.

“If they return [from loan to City], then it is not to play with the first team, but to be sold. It’s commerce. But we understood only later,” he explained. 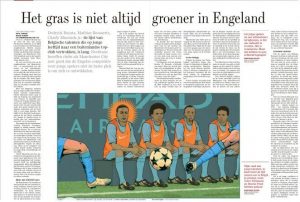 Limited playing saw him leave City and make a permanent switch to Celtic in 2015, where he has now established himself as one of the key players in Brendan Rodgers’ side.

Celtic only paid £1.5m for the player, so it wasn’t so profitable for Manchester City.