It’s not the Portuguese media pushing strongest on Joao Felix’s future right now, and that’s been the case for a while.

There were big claims from English newspapers over the weekend, and in Spain there’s been something every day about a supposed battle between Manchester City and Atletico Madrid, with Manchester United occasionally thrown into the mix.

Monday’s edition of AS has some big claims, and reports the present sees ‘decisive hours’ on the Benfica youngster’s future.

The 19 year old is ‘anxious’ about his situation and wants to know who he’ll be playing for next season. It’s claimed that on Sunday he had his ‘suitcases ready’ to travel to Madrid, if they won the transfer battle with Manchester City.

Benfica are still demanding the €120m clause, and Atletico had been trying to get that figure down by sending players the other way. However, it’s stated that any options relevant to the Lisbon club are beyond their salary range. 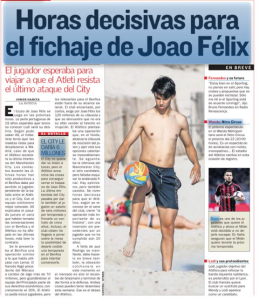 There was also talk of a big sell-on percentage, around 30%, but that hasn’t swung things either.

So Atletico have ‘proposed an operation’ which ‘in the end’ reaches the €120m. AS don’t explain how that’s structured.

Manchester City are very much still in the picture, according to the claims, yet there’s some optimism at Atletico.

Club have ‘rejected’ Tottenham’s offer for midfielder ‘in past few hours’...