On Thursday, we covered claims made by Diario de Sevilla that Chelsea have ‘activated all machinery’ to sign Jules Koundé

This came after Gianluca Di Marzio reported the operation to take the Sevilla star to the west London club should go through for €50m plus bonuses.

Later that day, Sevilla president José Castro Carmona said “there was nothing” when quizzed about a Blues’ offer for the defender.

AS claim Monchi, the sporting director of the Spanish club, didn’t attend the Champions League draw yesterday and was working on Sevilla transfers.

Focusing on the France international, the newspaper states the La Liga side didn’t accept the €50m offer made by Thomas Tuchel’s side on Wednesday.

Chelsea director Marina Granovskaia is leading negotiations for the centre-back, and is in ‘permanent contact’ with the Sevilla chief.

Monchi has no plans to let the player leave for less than €60-65m plus bonuses since they have to pay 15 percent of the fee to his former club, Bordeaux. 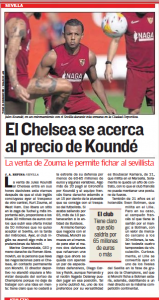 AS’s title reads ‘Chelsea get close to Koundé’s price’ and within the report, it’s said the European champions ‘got a little closer’ to Monchi’s demands yesterday.

They add the 22-year-old’s transfer to Chelsea will enter ‘decisive hours on Friday’, after the Premier League side sold Kurt Zouma to West Ham United for €30m.

This will provide Chelsea funds to increase their initial offer of €50m to acquire Koundé’s services.