Wolverhampton Wanderers’s Roderick Miranda has given a full page interview to Portuguese newspaper Record, which is out in Saturday’s edition.

Record’s chat with the Wolves player was put among the Benfica pages, as the defender was repeatedly asked if he expected a return to his old club this summer.

Miranda was at Rio Ave, and although some rumours from the Portuguese press said Benfica were thinking of bringing him back, he ended up making the move to the Championship with Wolves.

But the defender doesn’t regret going to the Championship.

As he had previously said his objective was to return to a big club, Record asked him if it was hard to sign for Wolves, who until recently weren’t a widely talked about club in Portugal. 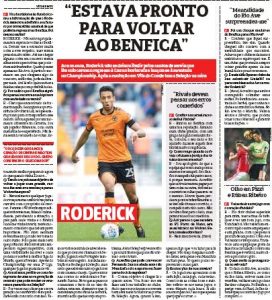 “Of course any player sets ambitious career goals for the purpose of growing,” he said. “Towards Wolves I was reticent but, speaking calmly, realising the situation, the country where I came from and the football I was joining, at this moment I consider that I took an important step.

“I don’t feel any resentment for not taking another turn. It was the most certain step I could take. I found a super competitive league, with incredible visibility and where we can be promoted to the best league in the world, which is the Premier. Although the Championship is a second league, any player would like to come.”

Roderick Miranda didn’t need any time to adapt to English football and has started all of the Wolves’ five league games so far. He was transferred on a permanent deal from Rio Ave in a €3m move.