It’s reported the Premier League club are keeping tabs on the Croatian defender, who has been linked with a move to Slaven Bilic’s West Bromwich Albion in recent weeks.

According to Turkiye, the Besiktas board are happy to let Vida go, given he’s the highest earner at the club with a yearly wage over €3m, and are willing to negotiate his sale with the interested parties. The Istanbul side reportedly value the player in the region £6m.

However, it’s claimed the 31 year old is happy and enjoying life in Turkey, so he may want to stay at the club until the end of his contract, which will expire in June 2022. 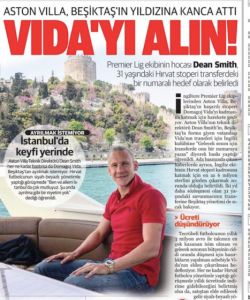 Also, any move for the central defender is likely to depend on whether Aston Villa are in the top flight next season.

The former Dynamo Kyiv defender has made 32 appearances in all competitions this season, scoring four goals.

He’s been linked with around half the clubs in the Premier League over the past year or so, and Aston Villa claims started when the club was promoted.