Paying up to €40m for a young winger who only has five professional appearances to his name, Manchester United surprised quite a few with their acquisition of Amad Diallo.

The Ivorian had been earmarked by scouts at Old Trafford for quite some time, and while he was purchased during the last transfer window, he won’t be arriving until January.

Until then, he will remain at Atalanta, where he is getting the odd appearance, coming off the bench twice in the last two games: first against Hellas Verona and most recently on Tuesday night against FC Mitdjylland in the Champions League.

He wasn’t able to directly impact either game scoreline wise, but the 18-year-old did give a glimpse as to what Manchester United fans can expect from him, receiving a bit of praise here and there for his 13 minute cameo in the Italian press.

Take Il Mattino, for example, who said ‘Amad Diallo is deadly one-on-one, and you understand why Manchester United paid €25m up front for him at the age of 18’.

Throwing him at the deep end, Gian Piero Gasperini’s move was praised by Corriere dello Sport, who said the manager did so ‘to create superiority with one on one’, which was ‘the right move because the jewel created two chances’. 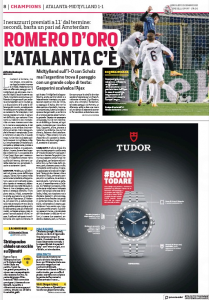 His inclusion was ‘the spark that rekindled Atalanta’, which led to their equalising goal in the 79th minute, as Cristian Romero found the back of the net from a Hans Hateboer assist.

Calciomercato add their little spin on it too, reminding everyone of the fee paid by the Red Devils, but making it clear Diallo’s impact was welcome, as he, in 10 minutes,  managed to ‘send more balls towards goal than the whole trident’.

Positive news for Manchester United fans, who will be glad to hear and see their future signing getting some minutes, albeit from the bench, ahead of his impending arrival in the north of England.