Middlesbrough fans are set to be disappointed with comments from Marten de Roon for the second time in a few days.

Whilst with the club, De Roon continually made an effort to get fans on his side and seemed a likeable character. As early summer claims of a departure, and return to Italy, built in the Italian media, De Roon took steps to dismiss it all as nonsense.

Reports were mocked by the Dutchman, and he gave the impression of being fully committed to Middlesbrough, rather than edging to get out of the place.

After comments earlier this week about the level of football at Middlesbrough, and the quality of life difference in Italy, De Roon has made it even clearer he’d been itching to leave for a while.

Speaking to Correire dell Sera Bergamo, De Roon was asked when he first thought about a return to Atalanta: “In February. I have always been in touch with the staff, with Luca Percassi. I wanted to return and we started talking about it. In Ibiza, I met Papu and confided my desire.”

Percassi is Bergamo’s general manager, and part of the family which owns the clubs. Papu Gomez is an attacking midfielder who has been at Atalanta since 2014. In early June, De Roon posted a holiday photograph on Instagram of himself with Gomez, presumably in Ibiza.

Asked why he wanted to leave Middlesbrough and return to Atalanta, De Roon explained: “I missed the city. The climate. The food. When I came back to Zingonia, the first thing I did was to eat a plate of tomato pasta. Then I missed the good coffee. My wife Ricarda supported the decision, she pushed to return. Then professionally I found that I prefer Italy. In the Premier League, the football is physical, but tactically I’ve returned. You, in Italy, are masters.” 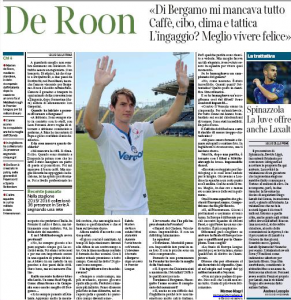 On any problems at Middlesbrough, De Roon didn’t expand too much this time.

In his comments a few days ago the Dutchman spoke of a split in the club’s dressing room, but this time said: “No, I always played and I scored five goals. The club is serious. Then we were relegated and it was important for me to be in a first division team. I lived in a castle in a small town just a stone’s throw from the city. I was fine, but I missed Italy.”

Correire della Sera wanted to know if, whilst at Middlesbrough, De Roon managed to keep up with Italian football: “Yes, although it was difficult in England because the TV didn’t transmit much Italian football. But some games I managed to see it. My wife was a crazy fan. I wanted to be in a team to live those moments.”

It’s a shame De Roon now feels so content to make it clear he was keen on a move away from Middlesbrough for so long, even well before the club were doomed to relegation.

Of course, the midfielder wants to cosy up to fans in Bergamo who saw him leave, and then Atalanta have a wonderful season without him, and that’s the aim of the game here.