Last week, Maurizio Sarri gave a lengthy interview to Il Mattino, where he opened up on a variety of topics, such as his exit from Napoli and the beginning of his adventure at Chelsea.

The Italian manager kept the drama to a minimum, although he did say he found out he had been sacked by Aurelio de Laurentiis by turning on the TV and seeing Carlo Ancelotti being presented as the new manager of the Serie A side.

What ensued was a lengthy battle between Napoli, Sarri and eventually Chelsea to get him out of his contract in Italy so that he could take over at Stamford Bridge.

Much to the relief of the man himself and fans of the Premier League club, that eventually happened, and everyone is happy with their current situation. 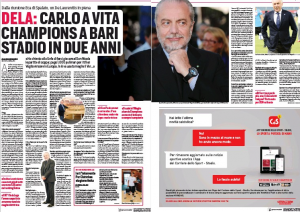 However, Aurelio de Laurentiis isn’t best pleased with Sarri’s interview, as he told Corriere dello Sport on Tuesday when asked if he wanted to reply to his former manager.

He said: “Absolutely not. He said completely inaccurate things, but I’m not going to reply otherwise this will become a soap opera with unpleasant tones and that doesn’t interest anyone.

“I’m happy with Ancelotti and I have not heard from Sarri since the bottle of champagne we opened after the last game of the season. Zero contact.”

So for those who wanted a back and forth, you aren’t getting one, and you’ll just have to pick who to believe.