Home Premier League Chelsea ‘Any day from tomorrow ‘ could be ‘right day’ to announce Chelsea...
SHARE

The Pedro saga is nearly over, everyone, because once it’s officially announced, we don’t have to cover it anymore (unless something dramatic happens, obviously).

While that hasn’t been done yet, everyone is very aware the current Chelsea player, who signed an extension to finish the season at Stamford Bridge, will be moving to AS Roma on a two-year deal with an option for a third.

Many have reported it, and when there is so much agreement on something, it tends to mean it’s true.

Corriere dello Sport give a brief update to their readers on the situation on Tuesday, explaining that ‘everything is OK’ on the Pedro front for AS Roma, and ‘any day from tomorrow onwards’ could be the ‘right day’ to make the announcement. 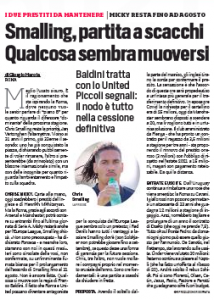 The Spaniard, apart from making it clear early on that he would be leaving Chelsea at the end of his contract, has kept his cards close to his chest so far, and, barring one of the biggest surprises of the summer, should be playing in Serie A next year.

The decision seems to be one based around wanting to still play at a high level for a couple of years, and with Paulo Fonseca ready to hand him considerable game time, it simply made sense.