The Terriers were adrift at the bottom of the Premier League table and survival looked a distant dream. It was an emotional exit, with the German manager having been at the club since 2015, and guiding them to promotion from the Championship before managing to keep them in the top division for a year against the odds.

After promotion to the top flight, and especially in the summer before he left, Wagner often spoke to the German media about the lack of finances at Huddersfield Town compared to rivals in the Premier League, and it putting his club at a big disadvantage before a ball was kicked.

Upon his exit, it was widely expected the manager would return to German football, and he did that when taking over at Schalke in May of this year. However, it wasn’t the plan he’d originally had in mind.

Speaking to this week’s edition of SportBild, Wagner has made it clear he expected to be given another chance in England’s showcase league. 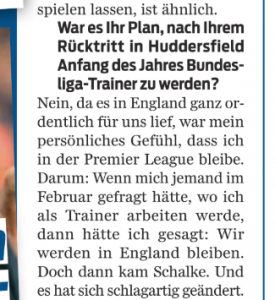 Asked if he thought it was time to manage a Bundesliga side after leaving Huddersfield Town, he explained: “No, as it was pretty good for us in England, my personal feeling was that I would stay in the Premier League. So if someone asked me in February where I would work as a coach, then I would have said: we will stay in England. But then came Schalke. And it changed abruptly.”

Having played for Schalke, Wagner admits that emotions played a part in his decision making.