Arsenal defender David Luiz has claimed not many people would have had the “courage” to move from rivals Chelsea like he did last summer.

The Brazilian defender made the controversial move to the Emirates last summer, bringing an end to his second spell at Chelsea.

His departure came as a considerable shock, arriving late in the window and entirely out of the blue as far as most were concerned.

Indeed, it had appeared that the defender would be playing a key role under new manager Frank Lampard, with numerous sources claiming as much.

That didn’t prove to be the case, and he was instead sold to Arsenal before the window closed, a move that he claims few would have the courage to make.

“I had a very frank conversation with Frank Lampard where we realised we had very different ideas about the game,” he told Record.

“I had signed the two year-year renewal to stay at Chelsea, but with Frank coming and after that conversation, I told him I was going to another cycle in my life.

“I decided to leave Chelsea before Arsenal’s proposal came through. Many people would not have the courage to make this decision. A club as big as Arsenal gave me the opportunity to continue to live the high level of football.

“I could have picked clubs in championships without pressure and made more money, but I didn’t want to. I don’t want comfort; I want to always be in the fight for victories.”

Luiz has established himself in the first-team since he arrived at the Emirates, although his first year at the club has not been a successful one.

He has received plenty of criticism for some of his performances, with many disappointed he has not added the experience or quality that they were hoping for.

That’s led to rumours he could leave the club this summer, especially as it’s been revealed his deal was only for a year, as opposed to the two-year contract first claimed.

As is always the case, he has been linked with making a return to Benfica, but the defender says such a return is not in his hands.

“It’s not in my hands, because Benfica is well structured and it is not a player who will control the planning,” he added. 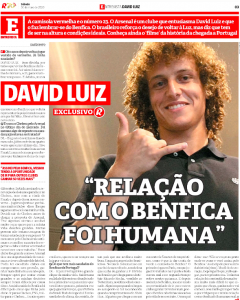 “When it has to happen, it will happen. I’m not going to say it’ll be on Day X because if it then doesn’t happen it turns a truth and pure feeling into a lie and it’s not.

“Let it be done at the right time for both of us and for everyone to enjoy. Benfica doesn’t deserve me coming back without being able to help.”