Damien Comolli might not be remembered as the best director of football ever at Tottenham and Liverpool, but one thing he can be thanked for, according to himself, is the setting up of the data analysis system the clubs still use to this day to go through statistics and see where they can improve going forward.

Of course, technology has allowed a lot of advances to take place over the past few years, but the core idea remains the same as when he started it all during his stint on the boards at Anfield and White Hart Lane.

Speaking to France Football, the now Fenerbahçe director of football explained exactly what he did with Spurs (where he worked between between 2005-08), which was then picked up elsewhere.

He said: “We are the ones, at Tottenham, who started using this system of statistics as early as 2006 by getting a company called Decision Technology involved in football. They were doing columns in the Sunday Times and had got in touch with Billy Beane, who was impressed with them. Billy told me I should contact them. One of the three people I met was Ian Graham”.

For those who don’t know, Ian Graham is currently Liverpool’s director of research, and has played a huge part in helping Jürgen Klopp’s side in identifying the right players for the team over the years, starting with Philippe Coutinho.

Comolli continued: “That’s how he started in football, by assisting us at Tottenham. It’s actually with these methods that we signed Hugo Lloris. When I arrived at Liverpool, I wanted to develop an analysis department. It wasn’t a widespread thing at the time. I consulted a few data providers, like Amisco, to see what they thought.

“They told me the best in that department was Michael Edwards, who was responsible for that at Tottenham, and Ian Graham. That was lucky, since they were the two recruits I wanted for statistical analysis and recruiting. They’re still there at Liverpool, where Michael is now sporting director”.

Statistics are becoming more and more prominent in today’s game, and even in reporting, with expected goals (or xG) and expected assists (xA) widespread terms used in football talk.

According to Comolli, he played a big part in that. 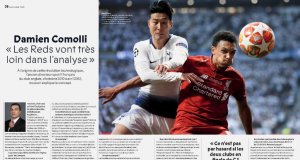 He said: “At Tottenham, we developed a model of analysis called ‘expected goals’. Thanks to this mathematical system and these algorithms, we can measure what each player brings on the pitch. Every time he brings something positive in ball progression, he’s credited with a point. These figures allow use to evaluate the impact of a player in a team’s result”.

In the end, it was all this research that led to Liverpool buying Mohamed Salah, for whom they paid a measly €35m when he would go for four times that in today’s market, if not more.

Comolli believes Roma ‘undervalued’ the Egypt international, and the data gathered by the Premier League club allowed them to see he was ‘much better than what the market thought’.

It’s a trend we’ve seen over the years at Liverpool, with the likes of Andrew Robertson and Sadio Mané all coming in at reduced prices and now looking like absolute bargains when comparing the club’s expenditure to their eventual output on the pitch.

It’s now Fenerbahçe’s turn to profit from Comolli’s experience, and it will be interesting to see whether they slowly but surely climb up the ranks thanks to his input in recruiting in the foreseeable future.

We might have even seen the beginnings of this with the signing of Vedat Muriqi this season, who has impressed since arriving both at club and at international level, most recently through his performance against England for Kosovo.

For the rest, only time will tell.