In yesterday’s inaugural edition of The Daily Paul Pogba, we explained how some of the reporting in Spain was starting to have a negative slant.

The excitement of the Real Madrid rumour was being tempered with explanations over how hard it would be to sign the Manchester United midfielder, and the huge amounts of money involved.

It’s not unusual for rumours to move like this, and they can often swing back the other way, but the negativity has continued on Thursday.

The back page of today’s Marca explains Madrid weren’t entirely convinced when they had the opportunity to compete with Manchester United for the player in 2016. 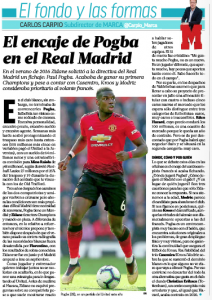 Marca believe that things could be different this time, with quotes from Zinedine Zidane and Pogba ‘seeming like a strategy to wear United down’.

The Frenchman would be ‘very expensive’ and the debate at Madrid is: ‘Where will Pogba play? How will Madrid play with the Frenchman? And who will he play instead of?’

The Spanish newspaper doesn’t think the answers are clear, and say that’s why it shouldn’t be ruled out that ‘more orthodox midfielder’ Christian Eriksen could still be an option.

AS say Pogba had a big chance to shine against Barcelona, to impress Madrid, and didn’t.

They’ve now published a second article which is rather entertaining. Before reading the next sentence, make sure there’s no drink in your mouth.

AS claim Real Madrid want €130m (one hundred and thirty million Euros) for Gareth Bale. They’d come down a little, but that’s the asking price.

Have AS been on the Cruzcampo early today? Maybe not, maybe there’s a (not so) cunning plan at work, because later in the same article they say Bale could be exchanged with Pogba, with a ‘small amount’ of money on top for Manchester United.

So if the media close to Madrid talk Bale’s price up, then his perceived value would be bigger in negotiations for the United player. We’re on to you.

The same plan could also be used with Tottenham for Christian Eriksen, they add.

Spurs’ great Dane is being increasingly pulled in as an alternative, which will please the Danish media but not so much Tottenham fans.

Casemiro has been doing some flirting, quoted by Mundo Deportivo as saying: “A player like Pogba is compatible with any team.”

They believe he went missing last night and put in a poor performance on a night he could have impressed Madrid, Football’s Gods will currently be planning on him scoring the winning goal at the Camp Nou. 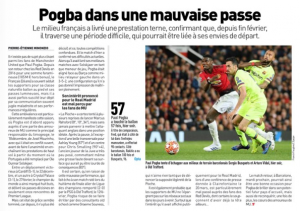 Over in France, L’Equipe are going all heavy again. They gave their national team star 3/10 for his performance against Barca, a mark less than Ashley Young.

In a separate article they expand on what they call a ‘dull’ performance, saying it could be because of his ‘desire to leave’.

He won’t be ‘spared on social media’ by Manchester United fans this week, according to the French newspaper, and Graeme Souness ‘who likes nothing so much as to denounce the supposed weakness of the Pioche’ may have a go too.