Sergio Agüero and Eric García will leave Manchester City when their contracts run down on June 30th.

The striker and the centre-back are heavily linked with a move to Barcelona and they are well placed to acquire the duo’s services.

Apart from Agüero and García, the La Liga side also have City youngster Adrián Bernabé on their ‘agenda’ for the summer. That’s according to a ‘Top Secret’ report from Mundo Deportivo.

Bernabé, like the Spain international, left the Catalan club for City. He arrived in Manchester three years ago and has made five appearances [all of them in the EFL Cup] for Pep Guardiola’s side since the start of the 2018/19 season.

The 19-year-old has been featuring mostly for Manchester City’s U23 side, which is why he wasn’t handed more opportunities with their first team.

Like Agüero and García, the teenager’s contract also expires at the end of next month. Barcelona, who are tracking the market for ‘low cost operations’, are ‘working to recover’ Bernabé.

The youngster’s profile is appreciated at the Camp Nou because of his ability to operate as a left-back and also in midfield. 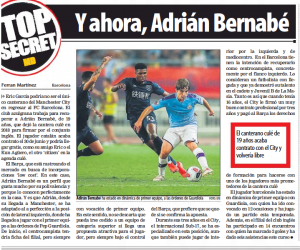 Barca’s idea is to initially include the player in their reserves, with the possibility of making the jump to the first team. They could allow Bernabé to go out on loan, if there’s an interesting proposal.

The feeling from the report is Bernabé is unlikely to continue at City beyond this season and he could be on his way back to Barcelona.