Sitting seventh in the table and just two points outside the top five, things are going rather well for Crystal Palace at present.

Drastic changes are certainly not needed in the January transfer window, but if there is one signing Roy Hodgson would want, it’d be a new striker.

Jordan Ayew has impressed this year but is not a consistent scorer, while Christian Benteke has forgotten what it’s like to score a goal.

Finding someone to fill the void would be ideal and it seems the club had lined up a deal to solve the problem last month.

Gazzetta Dello Sport report that early in November Palace had lined up a deal for Genoa striker Christian Kouame and the Italian club’s president had ‘virtually closed the agreement’ with the Eagles.

The deal would have seen Crystal Palace paying €22m for the 22-year-old, who was keen on the move to the Premier League.

However, he then picked up a cruciate ligament injury which has ruled him out until next year and scuppered any move to Selhurst Park. 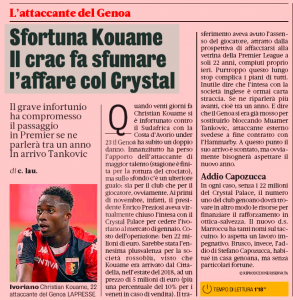 Indeed, the newspaper says the agreement with Crystal Palace is now ‘waste paper’.

That leaves Genoa looking for another way to get the money they need and Palace presumably looking at other options as well. 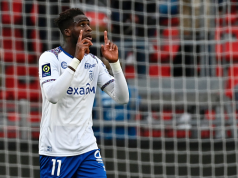