Crystal Palace goalkeeper Vicente Guaita is hoping Real Betis can convince the Eagles to sell him his summer.

That’s what ABC Sevilla report today, backing up claims that the Spanish side are interested in the goalkeeper’s signature.

The newspaper explains that Betis are ‘looking for alternatives’ for their goalkeeper spot this summer, with the idea to send Dani Martin out on loan to get regular playing time and experience.

Guaita is considered as a ‘feasible’ option by the club as he has experience in Spain having played for Valencia, Recreativo Huelva and Getafe before joining Crystal Palace on a free transfer in 2018.

They also know that the 33-year-old considers now a perfect time to return to Spain for the latter stages of his career.

Indeed, ABC have learned that there has been been ‘frequent’ contact between Betis and Guaita’s entourage in recent weeks, to the point that the player would now be ‘delighted’ to make the move.

The problem is Crystal Palace aren’t keen to sell. Their aim is to keep Guaita, so there is a ‘significant gap’ between the two parties at this point.

Betis will need to find an agreement with Palace that suits everyone, although that his contract at Selhurst Park expires next summer will likely be a good bargaining tool. 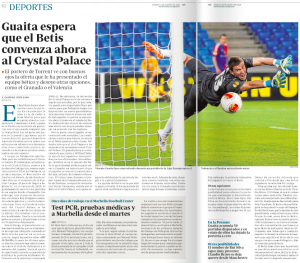 While that aspect of the deal needs resolving, Betis will have no problems with Guaita. They already have ‘everything’ agreed with him, and the ‘conditions’ of him moving to the club are ‘clear’.

He is ‘aware’ that alongside Wilfried Zaha he is among the most popular players at Crystal Palace, but he sees Betis as a ‘perfect opportunity’ to return to Spain.

He has even been in contact with a former teammate, Victor Camarasa, to discuss the club.

Betis is the move that he wants most, and he is delighted they are looking at him, although former club Valencia and Granada are also keen.