Adama Soumaoro is one of a number of players who could be leaving Lille during the summer transfer market.

L’Equipe have an article in their Sunday edition looking at players from the team who have a reasonable, or very good, chance of moving on soon.

The biggest sale will be Nicolas Pepe, and the Ligue 1 club want a huge €70m fee for the player. Then it’s Thiago Mendes, with Everton and PSG having interest, at least in the winter, and Adama Soumaoro.

Soumaoro is said to have been of interest to Crystal Palace, with Roy Hodgson’s club the only named by the report. It’s claimed that last summer, the Premier League side were ‘in touch’ over a potential signing. 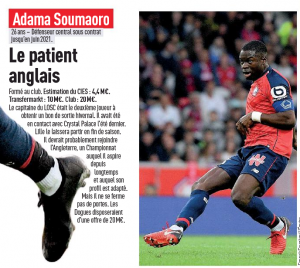 Crystal Palace would have a better chance this time around, with L’Equipe saying the midfielder should ‘probably’ now be moving to England.

Will that see the midfielder signing for Palace and ending a long chase? There’s not too long before everyone will find out.