Crystal Palace midfielder Yohan Cabaye has been speaking to French newspaper L’Equipe, and whoever gave the Frenchman media training should be proud of their work.

Cabaye skates through probing questions with the ease and professionalism of a diplomat. Whether it be about not giving up on the France team, whether he regrets leaving PSG, or Crystal Palace’s current situation, Cabaye says everything in a text book style, but still manages to sound at least a little interesting.

During the January transfer window, Cabaye was one of many players linked with a move to Ligue 1’s Marseille. Under new ownership and with big plans for the ‘project’ it’s expected that Marseille will kick on from here and forget the difficult recent years.

Questioned about Marseille interest, Crystal Palace’s Cabaye told L’Equipe: “It’s flattering, because OM is already one of the great French clubs. After that there’s my life in London, my club, and I focused on that. 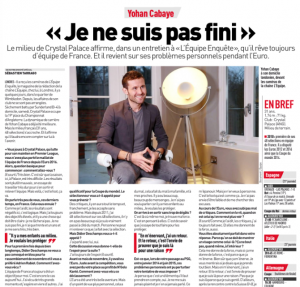 “It flatters. Really. I have immense respect for Rudi (Garcia), the coach and the person he is. But there is a reality. And we are in a complicated situation with the club. What I can say is that the only connection I have with Marseille is my fourth daughter was born there, that’s all.”

Cabaye’s future at Crystal Palace will of course largely depend on whether the club maintain their Premier League status this season. But, having just turned 31 years of age, and with a season after the current still on his Palace contract, Cabaye may look to stick around until the end of his deal.