Scouts from English clubs didn’t have much of a rest. The season has barely started and officials are already on duty, as highlighted by the Portugese press today.

Newspaper Record points out that it doesn’t matter that the Premier League transfer window is already closed, as emissaries from Crystal Palace and Southampton were both in Porto this weekend.

They’ve visited the Estádio do Dragão, where Porto won their first league match of the season with an impressive 5-0 scoreline against Chaves.

The targets for Crystal Palace and Southampton scouts aren’t known by Record, so maybe this was a match to start checking who the talents of the Portuguese league will be this season. 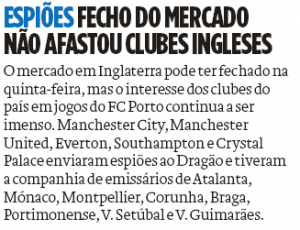 But the man of the match is already well known by the English clubs. Yacine Brahimi is frequently linked to Premier League sides, and started the league with a superb performance. Local newspaper O Jogo claims that they ‘can’t point out a single mistake’ from him.

Other Porto players such as Sérgio Oliveira, Otávio and Vincent Aboubakar also had a great match. It’s hard to find a positive from Chaves’ performance, but Stephen Eustáquio did what was possible to organise the midfield.

Scouts from Manchester City, Manchester United, Everton, Atalanta, Monaco, Montepellier and Deportivo La Coruña have all attended to the match as well.