Crystal Palace have once again been credited with serious interest in Barcelona’s Munir El Haddadi.

At this stage it’s unclear whether Crystal Palace, and Sampdoria, are just being thrown in through a mixture of hope and habit, but Mundo Deportivo are insistent.

Along with Palace and Samp, Deportivo La Coruna and Alaves are also interested. Barcelona’s problem, as has been the case all summer, is no club is willing to pay the €20m asking price.

The interest from outside of Spain would have seen a bigger chance of the €20m being reached but Crystal Palace and Sampdoria are simply unwilling to go to such a figure. 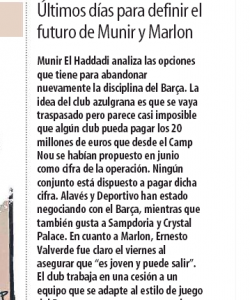 Now pretty much giving up on the €20m, Barcelona’s next plan is to look for a specific type of loan.

The club want to send Munir somewhere where Barcelona’s style of football is understood, to help the 21 year old’s general development.

Frank de Boer knows a thing or two about the Barcelona style, but implementing that at Crystal Palace is quite another thing.