Premier League side Crystal Palace sent officials all the way to Portugal this weekend, so they could watch Sporting’s away match against Boavista.

Although the home side opened the scoring, the Lions have shown their strength by equalising in the first half, then making a comeback with a penalty in extra time.

Newspapers Record and O Jogo both report the Crystal Palace’s trip, although neither of them knows who the target was.

The man of the match was once again Bruno Fernandes, who dominated the midfield. Other Sporting players such as Jeremy Mathieu and Raphinha had good performances as well. For the home side, the defensive partnership between Neris and Bruno Jubal were responsible for making the Lions struggle to get a good result.

It’s really hard to guess who Crystal Palace were watching, since they haven’t been linked to players from these clubs for 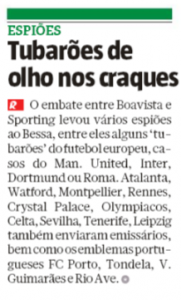 a long time. And although the London side aren’t always scouting matches in Portugal, they do it sometimes.

This will be window shopping ahead of the summer market.