Crystal Palace are ‘raising the pressure’ on Juventus midfielder Aaron Ramsey, with a deal ‘closer and closer’ to completion.

That’s according to both Tuttosport and TuttoJuve, who say the Eagles are looking to convince the Welshman on the move to Selhurst Park.

Juventus are keen to get rid of Ramsey this month as they look to get a player who is not in their plans, but on huge wages, off the books.

A return to the Premier League appears to be the most likely solution, and Crystal Palace have been linked with a move for the last few weeks.

Tuttsport and TuttoJuve now pick up on that and provide their own information on the potential deal and where it is.

The former states that Crystal Palace ‘raise the pressure’ on Ramsey, with Patrick Vieira ‘open-minded’ about a move and making that clear when asked in public. 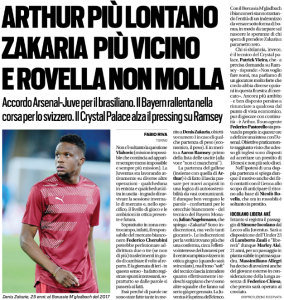 TuttoJuve also say a deal could be on the way, stating that Crystal Palace are ‘closer and closer’ to the midfielder.

Vieira is reportedly ‘trying to convince’ the Juventus man to make the move to Selhurst Park, with the Frenchman’s words in public seeming to ‘leave the door open’ for Ramsey to return to London.

Neither offers any information on a transfer in terms of fee or if it would be a permanent deal or a loan deal, just that Palace are getting closer to getting their man.