Crystal Palace and QPR both had officials at Saturday’s match between FC Porto and Maritimo, report A Bola.

The home side won the match 3-0, with goals from Alex Telles, Eder Militao and Yacine Brahimi.

QPR pop up every now and again on Portuguese scouting lists, but the Championship aren’t in the country transfer planning as often as Crystal Palace. Since Autumn, Roy Hodgson’s side have been spotted multiple times at Porto matches, and that led to a transfer story being built around Hector Herrera.

The Herrera links were somewhat manufactured, as we explained back in October, although there’s the potential of some interest in the Mexican midfielder.

His contract expires in June and there’s been interest from Lyon, Atletico Madrid and others, so perhaps he’s out of Palace’s range.

Brahimi’s contract also expires at the end of the current season. 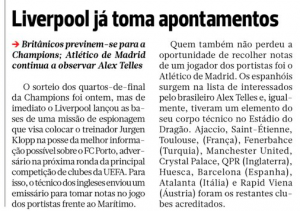 There’s no claim from A Bola of who QPR or Crystal Palace were watching. There’s now more scouts present every match as transfer planning heats up ahead of the summer.

Also at the match were officials from Liverpool, likely spying ahead of facing Porto in the Champions League, Manchester United, Barcelona and several other clubs from France, Spain and Italy.