Crystal Palace are ‘pressing’ for Radu Dragusin, according to Sunday’s edition of Corriere dello Sport.

Roy Hodgson’s side are one of several to have been linked with the defender so far this year, with Tottenham Hotspur and Newcastle United joining them from the Premier League.

The Italian newspaper also covers interest from RB Leipzig, so it’s clear there’s growing admiration for the 19-year-old Romanian. According to the claims, Palace interest is something which continues, with the acknowledgement interest has been there for a while.

He’s currently with Juventus, having joined the Turin club in 2018 and worked his way through their youth system. So far this season he’s been involved in several senior squads, and it’s explained he’s winning the trust of manager Andrea Pirlo.

Given his contract expires at the end of the season, Juventus need to get a renewal agreed relatively quickly. Corriere dello Sport report there’s confidence at the Serie A club over achieving that, despite the interest from Crystal Palace and elsewhere. 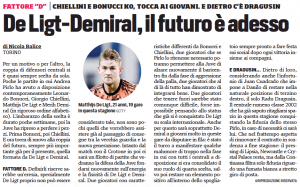 Dragusin is represented by Oscar Bentancourt, whose clients are often the subject of multiple rumours, so there’s every chance the claims are designed to give Juve a nudge in the renewal direction.