Earlier today we covered claims from Il Tempo that West Ham had joined Crystal Palace and Everton in the hunt for Maxime Gonalons.

AS Roma are considering selling the midfielder as they look to finish their own signings for the summer. Despite the club’s sporting director, Monchi, talking down a move for Steven N’Zonzi, the Italian media aren’t convinced and believe the Sevilla man is a target.

Therefore selling Gonalons would help provide some funds and make some space, and, as often happens with Serie A clubs, it would be no surprise if Roma look towards the Premier League for the best financial return. 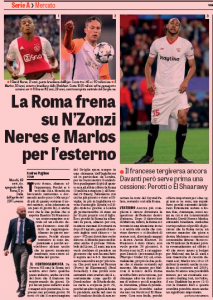 They only present Crystal Palace as an option for Gonalons and report that if the Frenchman turns down the move he’d likely be staying at Roma for another season at least.

This situation seems a little like Stefano Sturaro, with the Juventus midfielder being pushed to England clubs all summer but none biting.