Mamadou Sakho has the ‘ideal profile’ for Lyon, reports L’Equipe in their Monday edition.

The French newspaper are taking a look at Lyon’s search for at least one new central defender and they move to dismiss some of the targets who have already been claimed.

The idea of making a move for Sakho has ‘spread internally’ at the Ligue 1 club.

His knowledge, experience, power, mental strength and spirit are seen as big plus points by L’Equipe.

It’s then pointed out a problem could be that Sakho currently receives an ‘English salary’ at Crystal Palace, and he’d therefore be required to lower his expectations unless lyon are prepared to ‘break the piggy-bank’. 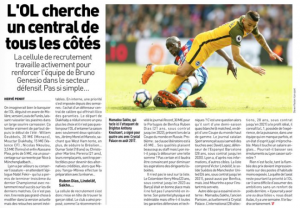 Palace’s potential thoughts on any of this don’t even get a mention, and surely that would be a bigger issue than salary.

The Premier League club are hardly going to let the 28 year old leave them for much less than they paid to Liverpool, and that’s if they even have the slightest interest in a sale.